Latvia's Maris Strombergs is WAY lower on the radar than the pack.

Maris used his low trajectory to move strongly into the lead

that he never relinquished while taking the GOLD at the BMX Olympic Event.

Maris Strombergs And Anne-Caro Take Gold At The Olympics! 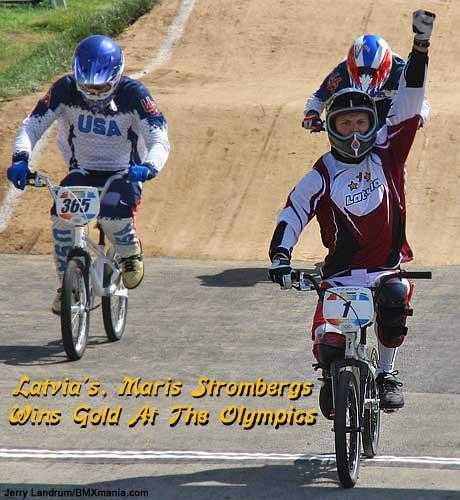 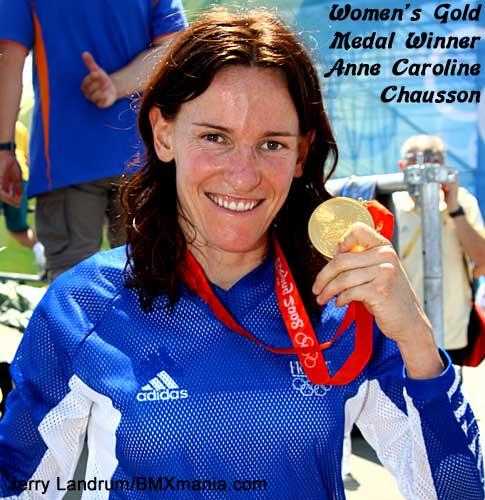 With four REDLINE Global Team members - Damien Godet (France), Manuel DeVecchi (Italy), Rob van den WILDENBERG and Raymon van der BEIZEN (both from The Netherlands) in the Semi’s, there was the rare possibility that Flight bikes could’ve filled half of the gate in the Olympic main.

But REDLINE would gladly settle for 2 out of the 8.

After three rounds of thrills and spills in the Men's Semis, only two RL reps would make the cut to the big O’show. Dutch dominator ROB van den WILDENBERG and French ripper DAMIEN GODET found themselves on the main stage, lining up against some of the toughest competition they’ll ever meet - Day, Robinson, Latvia’s Stromsburg, Aussie Graves, Jiminez and South African Nhlapo.

Eight riders representing seven different countries; this was exactly what the Olympics are all about. And REDLINE bikes outnumbered all other brands in the first ever Olympic final.

Godet, who'd made the Worlds main earlier this year, was out to defend a long standing French tradition of breeding fast BMXers. While Van den Wildenberg hails from the country that brought BMX to Europe and has one of the most serious Nationally-funded BMX programs behind him.

Choosing middle lanes, our history-making Redline riders were ready to get their “snap” on. As the World watched, the random gate cadence began and the gate slammed down!
From the get-go, it was all Stromsburg; the current UCi World Champ. But Americans Mikey and Donny were nipping at his back knobbies all the way down the second straight.
Skyin’ the 40 foot gap of the Girls berm, it was wheels to wheel action in mid-pack, with our Redline heroes poised to make their move for a top-4 spot. As they all hit the asphalt of turn two at mach speeds, Nhlapo lost traction and slid out, sending his bike in to Jared Graves, whose bike flipped up in front of France’s Damien Godet. Meanwhile, Van den Wildenberg managed to take the highroad and barely escaped the flaming carnage of France, Australia and South Africa - and would power in his Flight bike for a fifth place.

REDLINE would like to congratulate all who put on a GREAT show for the millions of viewers; from the UCi staff to all 48 riders who qualified and helped introduced many parents and kids to this awesome sport called BMX Racing!

IT WAS GOLD OR NOTHING FOR SHANAZE READE
For years now, it had been predicted by most that REDLINE~UK’s SHANAZE READE would become the Golden girl of BMX’s Olympic debut. But from the very first semi, it was not the complete domination we’d all had come to expect.

Unusually, the 17 year old BMX prodigy kicked off the evening by getting balled up in her first semi and had to settle for a 7th place. In round two, she scored a 2nd place behind France Laëtitia le Corguille. Sitting with 9 points, the pressure was on Shanaze to grab a top score in order to get a top-4 ticket to the main event.

Here is how they finished after the three rounds; taking the top-4 finishers to the main:

French MTB’er Anne-Caroline Chausson, in her final bicycle race of her long and illustrious career, had been predicted to be the closest to giving the Great Brit a run for the Gold but would not meet up with Redline’s wonder woman until the main event.

In the main, the eight fastest women in the World lined up for tens of millions of TV viewers to see what BMX is all about. From the start, Shanaze and rival Anne-Caro were straight to the front of the hard-chargin’ pack. Over the first jump, Canadian Samantha Cools looped and bailed in spectacular fashion.

Hitting the first turn at high speeds, in the very space where she’d crashed twice so far, Shanaze played it safe - which left the door wide open for the flyin’ French woman to swoop underneath and shut down the Redline rider’s line. Shanaze and her FLIGHT Pro XL were forced to dive to the bottom of the track and got back on the gas, pulling up alongside Chausson. Down the second and third straights, the two battled bar to bar.

Before the final turn, Anne-Caroline pulled a good lead with her smoother jumping skills from years of MTB downhill racing.

In the final turn, Shanaze was still within striking distance … the key word being STRIKE.

In what can only be summed up as a “It’s GOLD or nothing” move, Shanaze dove to the extreme inside and cut hard in to Anne-Caroline’s rear triangle in a last ditch effort. Rather than to wait for a drag race to the finishline, Reade took a stab at a solid Chausson, who held her ground and sent the Brit bailing off balance and bashing in to the paved asphalt.

For Shanaze and Redline, all of the hopes and dreams of Olympic glory in 2008 dramatically came to an end in the final turn.
But we are sure that beginning Saturday morning, all sights will now be set on Medal redemption in front of her home country - in 2012. 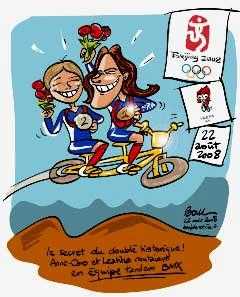 When Boul gets excited, The Artiste in him explodes, so here's his Congrats to Anne-Caro Chausson and Laëtitia le Corguille, Gold & Silver for France!

It's raining in Beijing and the race is POSTPONED until Friday morning!

Day, Bennett, Robinson in Round of 16; Kintner Qualifies Seventh in Women's Race

Kyle Bennett (Conroe, Texas), Mike Day (Santa Clarita, Calif.) and Donny Robinson (Napa, Calif.) all qualified for the round of 16. By doing so, the United States is the only country that advanced three competitors to the semifinals.

Competing in the same eight-man bracket, Day and Robinson placed first and third respectively after three quarterfinal heats to claim a spot in the semifinals. Day's win was triggered by a dominating performance that saw him win all three heats, clearly marking him as one of the favorites heading into Thursday. After a rough start, Robinson recovered from a crash-induced sixth-place finish in heat one to place second and third in the next two heats.

In the second bracket, Bennett looked solid in his first two heats, placing second and fourth, but came dangerously close to elimination after crashing in his third heat. While exiting turn one, Bennett went down after failing to avoid a pair of riders that crashed in front of him. The result was a dislocated left shoulder, which was immediately treated by team doctors on course. And even though he eventually re-mounted his bike and rolled across the finish line, he was credited with a DNF - did not finish - and given the maximum of eight points. Still, his point total was low enough to advance him to the semifinals and is expected to compete on Thursday.

For Day, his dominant performance began in the individual time trial round, used to seed the 32 entrants into four different eight-man brackets. His time of 35.692 seconds in his second of two attempts was the field's fastest of the day. Latvian Maris Stombergs clocked a 35.910 as the only other rider to post a time under 36 seconds.

In Thursday's semifinals, all three Americans will be matched against each other in the same bracket as Bennett, Day and Robinson join Marc Willers (NZL), Sifiso Nhlapo (RSA), Andres Jimenez (COL), Raymon van der Biezen (NED) and Arturs Matisons (LAT) in the first bracket.

As in Wednesday's quarterfinal, each bracket will run three heats with the lowest-four point getters from each bracket advancing to the finals.

Everything kicks of at 7:50AM with Men's/Women's Warm Up

The Olympic BMX Track was STUNNING, Monday as Day One of Practice was underway at the Laoshan Olympic Cycling Complex. 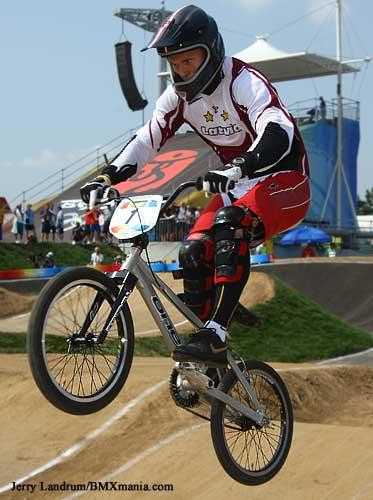 Wanna Cheer on your Favorite flavor of BMX Athlete?

Well, if  you are interested some "Fans Of Luke" have created a "Fan Club for Luke" on Facebook.

To join, go to groups and type Luke Madill in the search box. 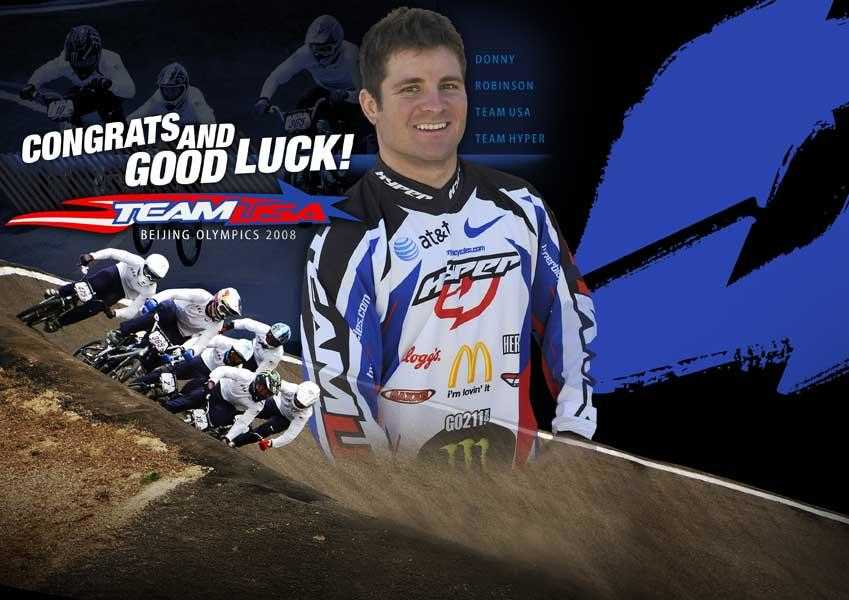 With the Olympics quickly approaching all of us at Hyper wanted to send our best wishes out to our very own Donny Robinson. 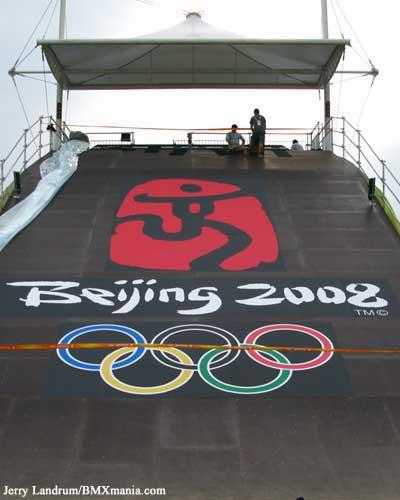 There's More Where This Came From!

BMX is right around the corner from the first ever appearance as a medal sport in the Olympics!

August 15 - Olympic News For The Day!

August 14 - Olympic News For The Day! 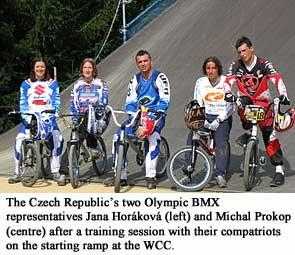 While the road cyclists have already crowned their Olympic road race champions in Beijing, other medal hopefuls in the Games’ new cycling discipline, BMX, have been finalizing their Olympic preparation at the World Cycling Centre (WCC) in Aigle, Switzerland.

The BMX competition kicks off in Beijing on August 20th and some National Federations chose to delay their departure for the competition site until after the beginning of the Olympic Games.

Since the beginning of August, Olympic BMX teams from France, Italy, the Czech Republic, Hungary, Latvia and Venezuela have trained at the WCC. The Latvian contingent, with World Champion Maris Strombergs, continues to train in Aigle this week. They will leave Switzerland for Beijing on Friday August 15th.

All the nations qualified for the Olympic Games in BMX, except the Netherlands and Argentine, have trained at least once at the WCC this year. Among the athletes were the two World Champions Maris Strombergs and Shanaze Reade (Great Britain) as well as the French athlete Anne-Caroline Chausson, multiple downhill World Champion, who returned to BMX in order to participate at the Olympics.

Track cyclists from the Canadian Federation also used the WCC facilities from July 28 to August 10 in order to prepare the Olympic Games.

In addition, para-cyclists from the Czech Cycling Federation are on a training camp in Aigle from August 10 to 18 to prepare the Paralympics which take place in Beijing two weeks after the Olympic Games.

The Official Event Description - Olympic event: Bicycle Motocross (BMX) ..... Seating: 4,000 ..... Olympic dates: August 20-21 ..... Opening hours: Two hours prior to the start of competition ..... Walking distances: From LAOSHAN XIJIE bus stops at LAOSHAN West Street to the Venue: approximately 150 meters ..... Spectator Tip - Bicycle races are fast, aggressive and sometimes dangerous, so spectators are not allowed on the field of competition and must refrain from assisting athletes at any time.

LOTS OF VISITORS TO THE BMX MANIA OLYMPIC PAGE!