This Report Page Brought To You By.....

(More To Come, Sunday, Make Sure To Check Back!)

Don't look for a complete group of Elite Women racing in the quarter/motos on Saturday.

Many of them have a LOT on the line for this August at the Olympics in Beijing and won't risk it. Many will.

Here's how it went down, Friday In Copenhagen on the SoftTrack.

1 - The Elite Women practiced, but no one made it past the Third Straight...Mariana Pajon crashed hard and went off the track injured.

2 - The 'B Practice' for Elite Men took place, but only about four riders were able to take the VERY difficult Second Straight.

3 - The 'A Practice' started, but soon ended when most of the riders boycotted the practice session.

4 - The Race Organizers and representatives from the riders met and agreed to cancel Men's practice and do it first thing in the morning, before the comp starts.

5 - It was decided that the girls would have a 1/2 hour warm up, the two rounds of time trials, starting at 3PM/Friday.

6 - After about twenty minutes of practice, the Elite Women (except for 8 riders) the girls demanded a similar meeting to what the ladies got.

7 - It was decided at a meeting between race organizers and the lady BMXers that they would not run time trials today, but would go straight to their 3 motos tomorrow.

8 - Everybody went back to the hotel early again! 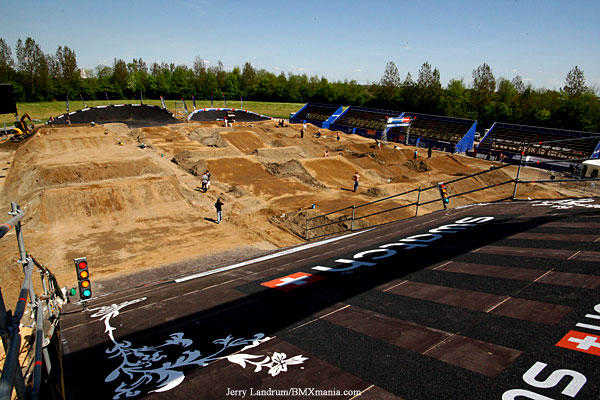 The track is built in a beautiful nature area, right in the middle of Copenhagen, Denmark's capital city.

Pretty amazing to find a piece of land like that in an urban environment that you can build a BMX track on.