CLICK HERE TO CHECK THE EVENT REPORT FROM ASA 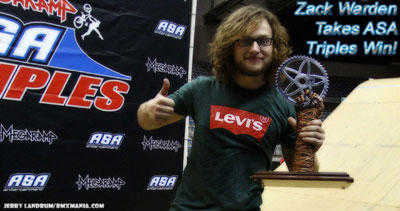 CLICK HERE TO CHECK OUT THE ACTION ON THE BMX MANIA COMP REPORT PAGE!!!!! 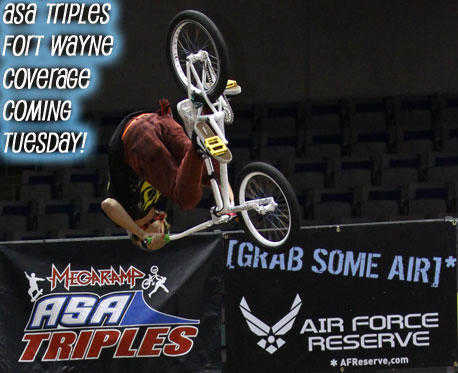 This will be the most physically and mentally challenging race ever created. Take 8 riders and eliminate 1 per rounds. That equals 7 rounds of racing to get the winner. Now take 100 riders and you have over 40 rounds of racing to get the UBEC Champion. All rounds will start with 6 riders. Eliminations go on  until 3 riders then recombined back to 6. All rounds are reshuffled so no one races the same racers round to round.

The final gate will have 8 riders. Then the UBEC CHAMPION will be awarded the UBEC Champions Belt at the end. There are 2 classes, 13 and over and 12 and under. Both classes are open wheel and class. Girls will be included in this mix because there are plenty fast females  who can beat the boys.

The object is clear, YOU DON'T HAVE TO WIN, YOU JUST CAN'T LOSE. The race is open to all riders NBL, ABA, MOUNTAIN BIKE, TRAIL RIDERS, ANYONE with the guts to attempt this event.

There will be free one day open house licenses to all NON-NBL riders.

Cash purses for winners from both classes. A separate prize awarded to the rider with the most wins( that rider does not have to be the champion). Also random giveaways to random moto winners all day.

THIS WILL BE THE HARDEST RACE EVER. START PREPARING YOU'RE GONNA NEED IT.

The Greatest thing about The UBEC is the reason. All proceeds will benefit THE CHILDREN'S HOSPITAL OF PHILADELPHIA. The race will be video recorded and shown at the hospital for the kids. There are plenty of kids there that we can help with this race.

Last night, Bundaberg BMX club were announced as the location to one of the largest BMX events in the country. In September next year, Bundaberg will host the 2011 BMX Queensland  State Championships which is expected to attract nearly 900 competitors from all over the state.

“It’s been about seven years since Bundaberg had the states and they missed out on getting it two  years ago. It was a very close decision.” admitted Bruce Oliver, President of BMX Queensland.

“The club has a strong committee and they will certainly do the state championships proud,” added Oliver. “It helps to have the support of the Bundaberg Regional Council.”

With the new international standard BMX track proposed for the Sleeman Sports Complex at Chandler in Brisbane and the Hinterland BMX club on the Sunshine Coast also in the running, Bundaberg BMX club were uncertain until the announcement.

Shane Davies, the Bundaberg BMX Club President knew they were in with a chance.

“We were surprised,” said  Davies, “we thought it would go to Chandler with the new facility, if it came to us then that would have been good. This is great.”

Already the prospect of putting on the second largest BMX event in the country is starting to sink in but the club have been busy doing the groundwork.

Christine Hilder got the proposal together and that’s a big part of it,” said Davies.

The biggest challenge will be to get people together to help out. People will put their hand up but we will need to build our volunteers.”

“It will be just fantastic for the riders in the club, mainly for the kids.”

It will be great for the town. Everyone will benefit out of it - the community and food outlets and accommodation places all over the region.”

With Queensland clubs already undergoing a massive boom. The Wide Bay region is also expecting an increase in club numbers.

“It will spark a lot more in the clubs around here for sure,” Davies said.

Accommodation can be booked via the Bundaberg Region website. Go to: www.bundabergregion.info

• Pro Am for the Ladies - 100% Payout - Sponsors welcome to up the purse. - Scrambled Motos - Open Wheel

• All Class racing will be included, so everyone will have a class to race. - This is a local with some Raditude included.

Roll Call, who is in and what class or classes will you be running.

For more info, drop me a message.

The NBL Partners With BMX Legend, Greg Hill For 2011! 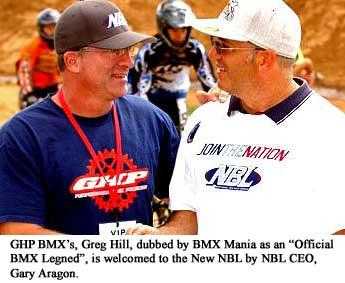 As a four-time NBL Pro Champion and 30-year veteran of the sport, Greg Hill brings unrivaled expertise and professionalism to the NBL. In his new role, Greg will help communicate the values of the NBL and its mission throughout the industry. NBL CEO Gary Aragon adds, “It is an honor for the NBL to be partnered with one of the true legends and pioneers of our great sport. We are genuinely excited about all that Greg brings to the table and having his endorsement only emphasizes the bright future ahead for the New NBL.”

BMX NATION had a chance to speak to Greg about his new role.

Explain your new role with the NBL.

I will be helping the NBL from a riders perspective on all levels with input to help push NBL to the next level, in short it will be a consulting arrangement.

Why did you choose to partner with the NBL?

It was an easy decision to jump on board, many of the new changes made to the new NBL are in line with my thinking and I knew the time was right to get involved.

What are some of your thoughts on the new NBL structure?

Providing great service to it’s members at a better rate is awesome, we live in tight economic times and the new NBL plan is perfect for the family that loves BMX and needs to watch the budget. It appears that the home work has been done, many solutions have been created to solve basic needs and that is exciting.

What are some of the biggest changes in the sport today?

The sport has just been kind of staying the same with little or no change up until now, I can see where these new upgrades can grow our sport and the NBL 10 fold and am really happy to be on the team to help it through.

What does the sport need to go to the next level?

Now we just need time to implement the program, NBL is on point for pushing BMX to the next level! Let’s roll!

Thanks Greg, we look forward to seeing you at the races.

More on the New NBL, Greg Hill and the BMX Nation, here!


The race came down to a fight at the line between Long and Willoughby with the American finishing first by a hair. Strombergs, who is always a favorite in any contest, grabbed the podium’s third spot. Jelle Van Gorkom (Netherlands) and Andre Sylvain (France) were fourth and fifth while Jorus Daudet (France) and Ramiro Marino (Argentina) were sixth and seventh.

Not surprisingly, 2009 Supercross World Cup champ Laetitia Le Corguille put forth a dominating performance in the women’s event to strengthen her lead in the 2010 series. She was followed over the line by French teammate Magalie Pottier. Collecting the bronze medal was the 19-year-old American, Alise Post (Saint Cloud, Minn.).The third-place effort was the first Supercross World Cup podium for Post.

“I had a good start. I thought I had second place in the first turn but then somebody swooped low and I got a little pushed off the track,” Post explained afterwards.  “I just had to ride with it from there, run with it. I ended up with third, so I’m happy.”

Here's a YouTube video of Alise talking about her podium finish...

The 2010 UCI BMX Supercross World Cup will conclude, October 8-9, in Frejus, France.  Visit www.bmx-results.com for complete results from each round so far.

We are proud to unleash the “TRUTH” on the BMX community.  We can’t hold them back any more.  The TRUTH handlebar is part of Morphine Industries continued assault of new components on the market.

The TRUTH bar maximizes control and ergonomics while keeping weight and strength at the forefront. Using 13 butted technology along with a flat bar design to provide the ultimate pull.

Grab a hold of the TRUTH and it will set you free.

BE SURE TO ASK FOR THEM AT YOUR LOCAL BMX RETAILER

Check us out at www.morphineindustries.com 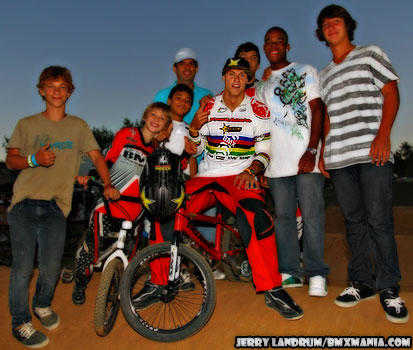 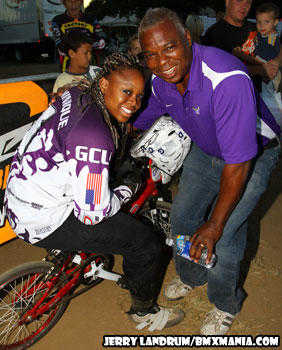 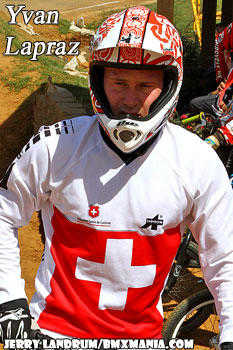 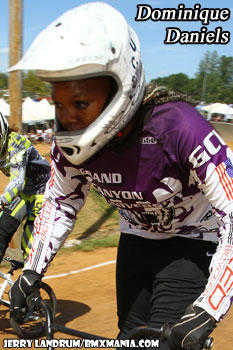 CHECK IT OUT ON THE NBL GRANDS RACE REPORT PAGE

BIG CHANGES ARE AFOOT AT THE NBL, BUT THE RACING IS GOING TO BE JUST AS CRAZY AS EVER.

CAN DOMINIQUE DANIELS REPEAT AS ELITE WOMEN'S NATIONAL CHAMPION? WHO WILL HAVE THE COOLEST TRACKSIDE SKYSCRAPER?

LOTS OF NBL GRANDS FUN AND GAMES, MAKE SURE YOU TUNE IN!