Chase BMX frames have been in development for over a year and a half, with the design inspiration coming from one of BMX’s all time greats, Christophe Leveque. Christophe is a 9 time World Champion, as well as winning the ABA #1 Pro title 3 times, the NBL #1 Pro title 2 times, and an incredible 22 time European and French Champion! 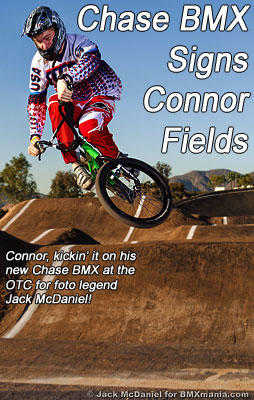 The frame was designed and refined with Christophe overseeing each step of the process and giving exact direction to ensure the frames are what we believe to be the world’s best BMX racing frames.  So with the best BMX frame in the World, we needed one of the best BMX riders to race it. Chase BMX is excited to announce today the signing of our first Elite rider to the brand.

On 1/11/11, a 2-year contract was agreed to and signed by Connor Fields. Connor was the top USA Elite rider on the UCI Supercross series in 2010, finishing 3rd overall in the world.  He also finished 2010 as the World #1 ranked Junior Elite Rider.

"I'm really excited to have signed on with and to be involved with BMX Racing Group for the new, upcoming season.  Working with Pete and Christophe is a unique and once in a lifetime opportunity. Not only are they supporting me on the race side, but I am getting to learn the business side of the sport that I love.” Connor said.

“Connor has been one of the most promising up and coming riders in the USA and at such a young age, has already proven he has what it takes on the international level at the UCI Supercross events. Having worked with him in the past, I knew he was not only a great rider on the track, but already understands how to give back to the sport and promote himself off the track. When the opportunity to sponsor him arose in early January, we jumped on the chance to sign Connor to our team to what we hope is a very long relationship”, stated BRG Strategic partner Pete Dylewski.

The Chase BMX team already has support from several excellent companies, such as Kicker Audio, Shimano, Insight, Excess, and Elevn. We will announce the full list of sponsors in the very near future.

Look for Connor to make his debut on Chase BMX next month at the ABA Oldsmar national event.

James Bisson. 15 Expert and 15 Cruiser. James is just a year into the expert class finishing 4th on 20 and 5th on cruiser on day one. James had a little bad luck on day 2 and did not make the main on 20 but did make the cruiser main getting 7th in the main. This is James 2nd year as a expert so you can expect to see him making a lot of mains this year with his great riding ability.

Savannah Lahr.17-18 Women's Challenger. Savannah took a year off do to injury but came back at the classic with guns blazing finishing 2nd on day one and 2nd on day two. Savannah has already shaken out the cobwebs from the year off and is riding harder then ever to show she can still play with the big girls.

Melanie Cline. 35-40 Women's Challenger and 35-40 Women's Cruiser. Mel is a multi time champ and she showed why at the classic by not losing a lap on both bikes both days. Chalk up 4 perfects for her at the classic. With dominating finishes, look for her to be on top all season long.

Team points. The team did awesome for their first big NBL race of the season, The team finished 4th out 17 teams on day one and 10th out of 15 teams on day two.

Like to give a quick shout out to all our cosponsors, SE bikes, Answer BMX, JW BMX products, Fly Racing, Jam Designs, Mad Max Marketing.

We are looking forward to the 2011 season. We will see everyone in Indy for the Midwest national in January .